Study notes for Word Analysis of Quran Lesson 4, Surah Baqarah Ayahs 8-16.  I hope you find them beneficial to your studies.

These ayahs cover the hypocrites and the consequences of hypocrisy.

8.  And from the people who they say, We believe in Allah and the Last Day,  but they are not believers.

وَمِنَ – And from مِنَ Min is from and gives the meaning of part of, or some of.  From the people, there are some  who have such characteristics, but not all the people.

People are always moving about, they are also forgetful. Even with our memories, we tend to forget, its part of human nature and a test.  For example, if you have memorised some Quran, if you do not practice and repeat it, you will forget.

There are some people who declare they believe. They say by their tongue, but they don’t mean their statements.

ءَامَنَّا- amanna, we believed. This is two words. ءَامَنَّا aman and na,  we believe.

This is Describing the day. The Day of Judgment, after which there will be no sense of time.

وَمَا – wama, and not. وَ wa-and مَا not.  Ma can have several meanings, the most common is ‘what’ or ‘not’.

بِمُؤۡمِنِينَ – bimumineen, In the least, believers. بِمُؤۡمِنِينَ Bi-In the least.  Here, the bi is used for emphasis. It is not being used in its literal sense but rather to emphasise they do not have belief in their hearts.

9. They (try) to deceive Allah and those who believe, but they deceive not except themselves and yet they do not realize it.

To be hypocritical and keep a person in darkness about the reality, by not telling them your intentions of what you will do. So, to say something false or something partly true. 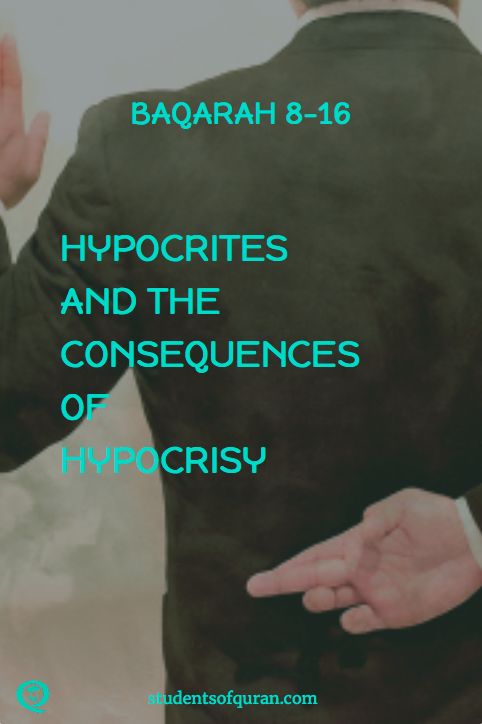 They try to deceive Allah and the believers by pretending to be believers.

The word شۡعُر  is also from the same root word used for hair. Hair is very fine and thin. Pertaining to knowledge, it is to know the fine details of something. They do not perceive the fine details or the consequences of their actions.

10. In their hearts is disease, so Allah has increased their disease; and for them is a painful punishment because they [habitually] used to lie.

The heart,  is never still, our feelings and emotions are always moving and turning about.

This word is generally used for a disease or an illness and can apply to mental, psychological or spiritual afflictions. Here, they do not have a physical disease but rather it is a spiritual one of doubt and hypocrisy.

فَزَادَهُمُ – so (He) increased them

The letter فَ generally has many meanings in Arabic.  فَزَادَهُمُ fazadahum, here it means so,  (He) increased them. Here, the fa gives the meaning, because of,  or as a result, and the root word زى د  ziad gives the meaning increase, more.

مَرَضً۬ا‌ – marada – a disease.   Because they chose not to cure their disease, Allah allowed the disease to grow.

.وَلَهُمۡ – walahum,  and for them.  hum referring to the hypocrites.

The root word Alam gives the meaning to feel pain, Aleem comes from this root word which gives more emphasis to the word. It is extremely painful and repeatedly painful.  That which will bring them pain over and over again, not just physical pain, but also emotional pain. There is intensity and repetition in words like Aleem, Rajeem, Raheem, Adheem.

بِمَا – bima, because of what
كَانُواْ – kaanu, they were.  When kaanu comes before a verb, it gives the meaning of doing something habitually. They didn’t just lie once about being believers, they did so repeatedly.

A lie is to give false information deliberately. To present falsehood as reality. They used to lie to the Prophet (pbuh) and the believers.

11. And when it is said to them, “Do not cause corruption on the earth,” they say, “We are but reformers.”

وَإِذَا – wa itha,  and when

قِيلَ
– it was said

قِيلَ qeela and يَقُولُ yaqulu are from the same root word qowl. There are many other branching words from this root.

تُفۡسِدُواْ
– you all do mischief

To create fasad in the land, to create corruption.

It is said to them, do not do fasaad on the earth. Fasad fil ardh is of two types:

إِنَّمَا – innama,  indeed, not but. Indeed, nothing but this, this is the reality.  Innama gives the meaning of:

Inna means, indeed and ma is there to limit the meaning.

مُصۡلِحُونَ
– ones who make peace

This root word Islah is the opposite of fasaad. Islah is to fix things, reform things; whereas fasaad is to destroy, corrupt, spoil.

12. Unquestionably, it is they who are the corrupters, but they perceive [it] not.

أَلَآ – ala, unquestionably.  Alif and La both together make a word used for the purpose of exclamation or warning (!) . Also used for the person of alerting the listener.

لَّا – la, not
يَشۡعُرُونَ – yash’uroon, they perceive. They do not perceive, understand, realize,  that they are those who do fasaad. 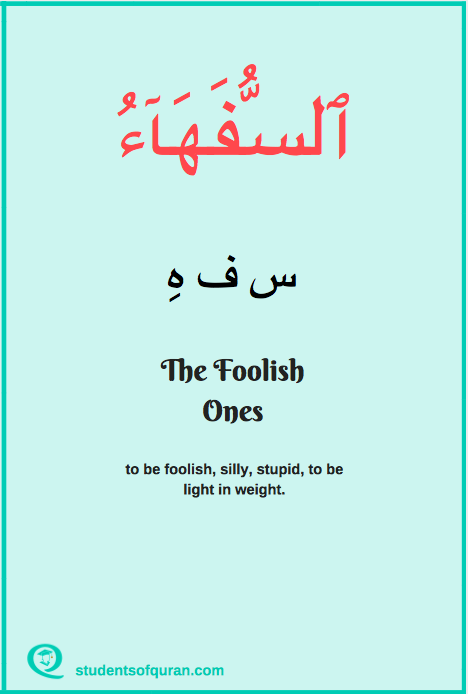 قِيلَ – qeela,  it was said
لَهُمۡ – lahum, to them (hypocrites)

ءَامِنُواْ – aminu, you all believe

They are calling the believers foolish, thinking that they are very light in their thinking, not strong headed. The hypocrites called ٱلسُّفَهَآءُ because they thought, look at how easily they left their religion.

14. And when they meet those who believe, they say, “We believe”; but when they are alone with their evil ones, they say, “Indeed, we are with you; we were only mockers.”

To meet someone, to come face to face with the other.

خَلَوۡاْ is used here as a figurative expression, meaning, when they are alone with; to be in seclusion with; only them and their satans, referring to their leaders.  Just as Shaytaan commands wrong, their leaders are also called satans.

One who opposes the truth.

إِنَّمَا – innama,  indeed, not but

To make someone a target of laughter.  They said we were only mocking when we said we are believers.

15. [But] Allah mocks them and prolongs them in their transgression [while] they wander blindly.

وَيَمُدُّهُمۡ
– and He extends them

To extend something. Madd in tajweed is to extend the sound.

They are unable to see that which is very obvious. They don’t recognize the obvious truth. They are living amongst the believers, yet they are still wandering blindly.

16.  Those are the ones who have purchased error [in exchange] for guidance, so their transaction has brought no profit, nor were they guided.

فَمَا – fama, so not

مُهۡتَدِينَ – muhtadeen, ones who obtain guidance.  Guidance was all around them but they did not internalize the guidance.