In these study notes, Tafseer Quran In English - Al Baqarah 8-16, we are going to look further into the characteristics of Al Munafiqoon the hypocrites and the consequences of hypocrisy

8.  And from the people who they say, We believe in Allah and the Last Day,  but they are not believers. 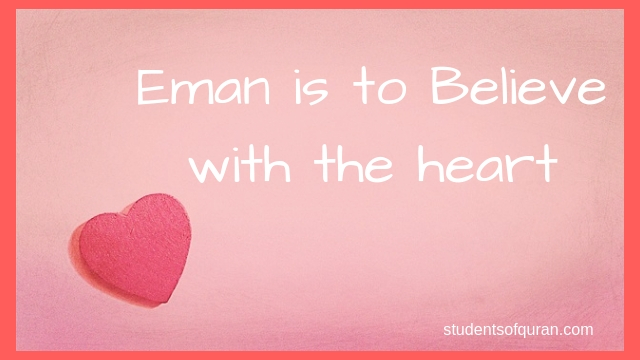 The true sign of the believers is seen in those who have eman, spend in the cause of Allah and establish salah etc. And of the people, there are some who say we believe in Allah and the Last Day but Allah says that they are not believers.  In their hearts, they don't genuinely accept. If the heart does not believe, a person is not a believer.

There can't be a discrepancy between these three sections of Eman.

The hypocrites overlook that there is Allah and figure it does not make a difference what they say.

قُلْ إِن تُخْفُوا مَا فِي صُدُورِكُمْ أَوْ تُبْدُوهُ يَعْلَمْهُ اللَّهُ ۗ وَيَعْلَمُ مَا فِي السَّمَاوَاتِ وَمَا فِي الْأَرْضِ ۗ وَاللَّهُ عَلَىٰ كُلِّ شَيْءٍ قَدِيرٌ      Say, “Whether you conceal what is in your breasts or reveal it, Allah knows it. And He knows that which is in the heavens and that which is on the earth. And Allah is over all things competent.Qur'an 3:29

9. They (try) to deceive Allah and those who believe, but they deceive not except themselves and yet they do not realize it.

The hypocrites think they are misleading Allah and the believers, but they are just deceiving themselves. 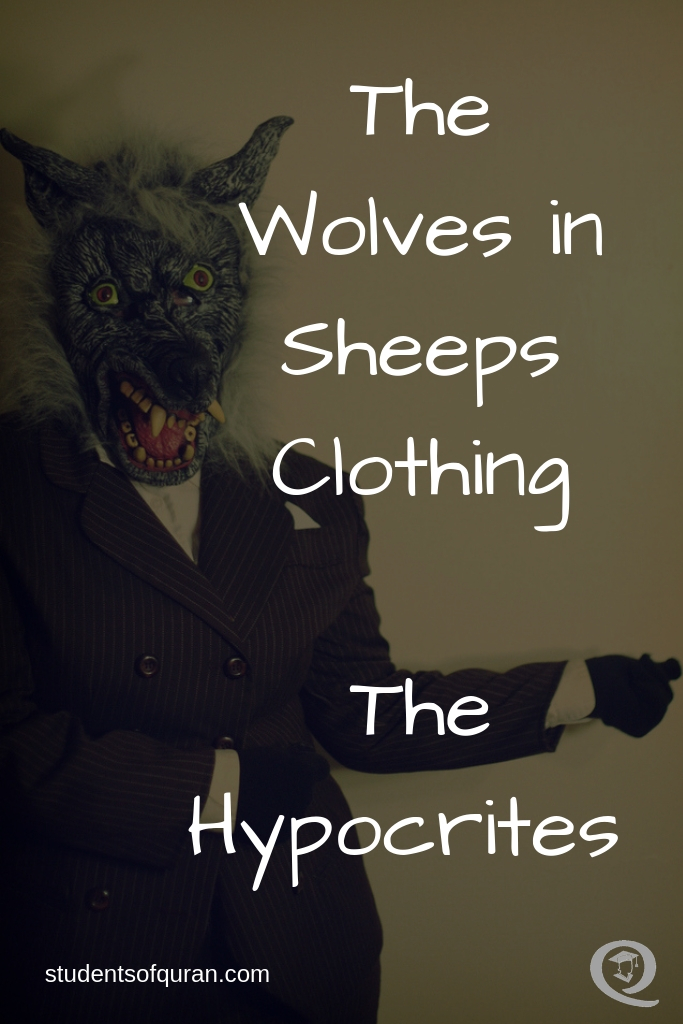 For thirteen long years, the Muslims were a minority in Mecca. There were only two groups, the Mu'mineen and the Kuffar.

After the battle of Badr in Mecca, a third gathering developed - the wolves in sheep's clothing, the hypocrites. Since Islam was the triumphant group, these hypocrites dreaded losing their status, riches, and so seemingly said they were Muslims. They craved the prestige and feared losing out on the delights of the war booty. Allah is advising the believers to be wary.

To begin with, we should check our hearts and after that be mindful of such individuals, but we can never label anybody a hypocrite. The Messenger, Sallallahu Alayhi Wasallam, never executed a Munafiq, he surrendered the judgment over to Allah.

These wolves in sheep's clothing continued taking and taking, however, they never gave, they never submitted to Allah. The Mu'min gives and gives. The Munafiq takes and takes.

Their evil plot just envelops these particular individuals. They only cause loss to themselves.

10. In their hearts is disease, so Allah has increased their disease, and for them is a painful punishment because they [habitually] used to lie.

Suspicion and doubt is the disease in their heart that makes them question. They have doubts about Islam and want just for this Dunya. Since they did not fix the sickness in their heart, Allah expands their ailment.

In what capacity can they cure the doubt in their hearts?

By obtaining the correct knowledge of the Qur'an and Sunnah. Likewise, sitting with good company. But, for them, the fakers, is an enduring punishment, one that will increase and never diminish. They will be in the most reduced depths of the hellfire in light of their bad intentions and routine lying.

The indications of a hypocrite are three:

Lying harms eman.  Allah does not guide the wrongdoer or a liar. Lying and eman can't remain together in the heart. There are distinctive kinds of lies:-

False promises – when a man says he will accomplish something and purposefully he goes against his pledge.

False praises – this is another sort of lie – in your heart, you have no affection or regard for an individual, however, if that individual confronts you, you state how pleasant they look, say kind words, you say every one of these things just to make them feel good.

Exaggeration  – to misrepresent reality, the truth.

Sarcasm - on the off chance that it is excessive, this is additionally viewed as a type of lie

Jokes - causing hardship for the sake of a joke

These are some examples of many types of falsehoods a man can submit in their day to day life. Simply knowing the punishment ought to be sufficient for one to leave lying. Regardless of whether that individual fasts and supplicates, yet he is lying, he will have a symptom of a hypocrite in him. Lying once prompts different lies. What's more, on the grounds that their lives depend on lies that is the reason they cause deceit corruption upon the earth.

11. And when it is said to them, "Do not cause corruption on the earth," they say, "We are but reformers."

When they are advised not to spread corruption, they liken their corruption with reformation, making peace. This disregard in wrongdoing is a method for spreading corruption on the land. When you are not genuine with Allah, or the Prophet Sallallahu Alayhi Wasallam, and the believers, that is the point at which you are making fasaad and this is exactly what the hypocrites were doing. Nifaq in itself is a defilement of the heart. In the event that the heart is corrupt, the tongue articulates lies.

They can't perceive the wrong they are doing, so they think they are doing great. They want to profit both from the Muslims and the opposite side.

For what reason is lying such an immense sin?

Consider cheating as an example. When a person undermines the other life partner and they are discovered, what's the main thing they say? "You lied to me" Everything originates from that. They ignore Allah, lie and subsequently, they increase in wrongdoing all the more creating corruption, more lies, and more haram just to discover much more destruction. Such individuals will cause a lot of corruption within their close family, their more distant family, within their network, and in the general society.

12. Unquestionably, it is they who are the corrupters, but they perceive [it] not.

Certainly, it is they who are corrupt, however, they see it not. This is discussing the hypocrites who lived in Madinah.

They were deceiving the Muslims and the Kuffar, not with one side or the other but, rather they took both sides, however, they were not on either side. What's more, they called this their reformation while it was really fasaad. They needed to make both sides feel fulfilled in order for them to gain the advantage from each side. They were being two-faced.

They saw that the believers were eager to sacrifice their time, wealth, lives for Allah, for Islam. They saw this only as a method for misfortune. They craved this worldly life so they attempted to profit by each side. Allah says that they are the foolish ones, however, they don't see it.

At the point when the hypocrites are called to the deen, to Allah and Islam, they are aggravated and want to flee from eman.  The person who turns away from this deen, he is the foolish one.

They likewise consider themselves scholarly people, thinking just they are on the correct way. The early believers to Madinah were not exceptionally rich. The hypocrites looked downward on them and they would not like to be among them, they considered them to be inferior. They would not like to sit among the poor in gatherings. For them, intelligence was estimated by the amount one gained in riches. They did not like to give in charity and don't have full conviction in the hadith that says that charity does not decrease one's riches. They didn't believe in the hereafter so they didn't anticipate it.

So we discover that the hypocrites:-

1. They don't prefer to be called to the Deen, when they are called to Allah, to the Quran and the Messenger, they are unsettled, they would prefer not to be involved, they would prefer to escape from eman and they keep running from conviction. Allah says the person who keeps some distance from his deen he is the person who is making a fool of himself.

14. And when they meet those who believe, they say, "We believe"; but when they are alone with their evil ones, they say, "Indeed, we are with you; we were only mockers."

In front of the believers, they say that we have believed. But when they are alone with their leaders, indeed we are with you. They say we were only mocking the believers.

By mocking the Mu'minoon, the Munafiqoon they are also mocking Islam.

Abu Hurairah (may Allah be pleased with him) narrated: The Prophet (peace and blessings of Allah be upon him) said:-

“The worst people before Allāh on the Day of Resurrection will be the double faced people who appear to some people with one face and to other people with another face.‟ (Sahih Al Bukhari)

15. [But] Allah mocks them and prolongs them in their transgression [while] they wander blindly.

Allah mocks them and prolongs them in their transgression while they wander blindly. This is the manner by which Allah guards the genuine believers. Allah gives the hypocrites more time. This is the Sunnah of Allah.

The hypocrites believe that what they're doing is correct on the grounds that Allah has not rebuffed them (yet). So they carry on indulge in sin and all their extravagance.

It is the Sunnah of Allah to give a nation or a person time. They are given a reprieve. Their insubordinate nature is uncovered in this Ayah. The Prophet Sallallahu Alayhi Wasallam said: two characteristics don't come together in a deceiver. Good Manners and the Comprehension of Deen

16.  Those are the ones who have purchased error [in exchange] for guidance, so their transaction has brought no profit, nor were they guided.

They have favoured misguidance over guidance. They prefer to stay in darkness, so their exchange has brought no benefit or guidance.

There are a few people who say if we follow the Qur'an, we will have to actualize it so it is smarter to keep away from it. These individuals are just misdirecting themselves, nobody else. To fully understand this Book, we should invest our energy, time, and battle to comprehend and implement it. Leave lying through and through as it only brings destruction.

Characteristics of a Hypocrite 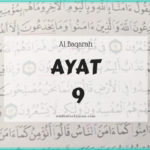 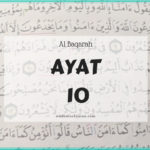 Doubt is the disease in their heart that makes them question. They have doubts about Islam and want just for this Dunya

يَكۡذِبُونَ  They Lie. They will be in the most reduced depths of the hellfire in light of their bad intentions and routine lying. 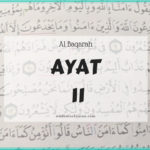 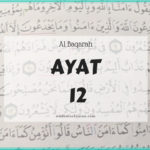 They were deceiving the Muslims and the Kuffar, not with one side or the other but, rather they took both sides, however, they were not on either side 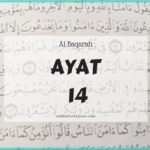